On January 26, 2015, I wrote an article questioning the relationship between falling oil prices, slowing Chinese GDP, and the precipitous decline in the U.S. stock markets. I counseled readers to take a breath, that the stock market turmoil was overdone and the U.S. economy was secure. 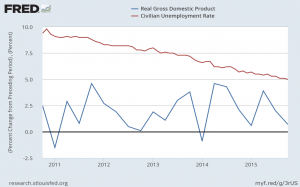 Why did the stock market react so well to such modest GDP growth? Perhaps because, if you look deeper into the GDP components, the slow growth was primarily due to weak exports and low oil prices, while consumer spending and residential construction remained strong. When considered in light of positive trends in disposable income and job growth, investors seemed fairly content with the 4th GDP results. Concern about specific sectors of the economy are well-founded, however, as low oil prices are indeed causing an increasing number of shale oil drillers to default on their debt obligations. But lenders prepare for this type of risk by diversifying their investments, and there is little evidence that distress in the oil patch will spread throughout the broader economy.

To twist a common phrase, every silver lining has a cloud, and in the days following the GDP announcement oil prices continued their downward trend and talk of an economic slowdown began to circulate in the financial press. By February 11, the S&P 500 index had plummeted to a low of 1829.08, before recovering a bit to end the week at 1864.78. Clearly, the turmoil was not over!

In fact, the most recent Conference Board Leading Economic Index published January 22 shows a strong positive trend, despite the U.S. stock market being a component of the index. It’s important to note, however, that the index fell slightly in December due to weaker growth in housing and manufacturing. Also of note, the latest Leading Indicator Index does not include January’s stock market decline.

Leading Economic Index as of December 2015 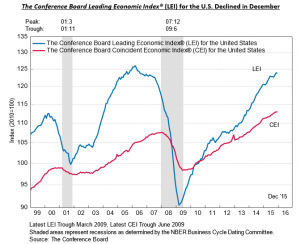 So, Where Do We Go From Here?

As articulated by Fed Chairman Janet Yellen in her testimony to Congress on February 11, the U.S. economy remains on an upward trend at present, though the future is uncertain. On the positive side, employment gains, low interest rates, and falling oil prices provide consumers with more disposable income to support domestic businesses. On the negative side, slowing Chinese and commodity-based economies, combined with the strong dollar, continue to depress U.S. exports.

On balance, I reiterate my earlier advice.

Stay strong, hold on tight, and wait for smoother sailing ahead. Investors with a tolerance for volatility might even consider buying into the distressed oil and gas sector.  Be warned, however! A risky endeavor such as this requires an abundance of fundamental analysis and healthy skepticism when forecasting future earnings. Such a venture is best left to the boldest among us with the ability to withstand the choppy voyage ahead.